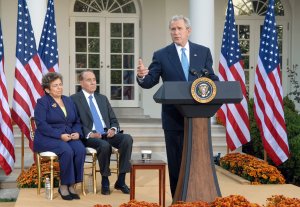 U.S. News // 1 year ago
Democrats on pace to keep House, but several election races still close
Democrats are on track to keep control of the House of Representatives, albeit with a smaller majority, updated vote tallies showed Friday.

U.S. News // 1 year ago
Obama unveils second round of endorsements
Former President Barack Obama on Friday released his final political endorsements of 2020, giving his support to 111 Democratic candidates in state and federal races.

U.S. News // 1 year ago
New York City enters final reopening stage; L.A. on 'brink' of new lockdown
New York City, which was at one time the epicenter of the COVID-19 outbreak in the United States, entered the fourth and final phase of the state's reopening plan Monday.

U.S. News // 3 years ago
Primaries in Florida, Arizona, Oklahoma end as final midterm matchups set
The final round of midtern primaries ended Tuesday, with voters in Arizona, Oklahoma and Florida choosing candidates to square off in November.

Kirby Hocutt is a proven leader, with the enthusiasm, thoughtfulness and commitment to our quest to be the top program in the country

Speaking on behalf of the board, we would be honored to have you as our first female member if you choose to apply

This is the right combination overall for our sports programs

While I was inconvenienced, Israel's security and the security of travelers is far more important

As a member of the university family, I am upset, disheartened and saddened by the recent allegations leveled against some current and past student-athletes and members of our athletic department

Donna Edna Shalala ( /ʃəˈleɪlə/ shə-lay-lə; born February 14, 1941) served for eight years as Secretary of Health and Human Services under President Bill Clinton and has been president of the University of Miami, a private university in Coral Gables, Florida, since 2001. She was awarded the Presidential Medal of Freedom, the nation's highest civilian honor, by President George W. Bush in June 2008.

Shalala was born in Cleveland, Ohio to Maronite Catholic Lebanese immigrant parents and has a twin sister, Diane Fritel. She graduated from West Tech High School and received her bachelor's degree in 1962 from Western College for Women (which, in 1976, was merged with Miami University in Oxford, Ohio).

She served as a Peace Corps volunteer in Iran from 1962-64, where she worked with other volunteers to construct an agricultural college.

FULL ARTICLE AT WIKIPEDIA.ORG
This article is licensed under the GNU Free Documentation License.
It uses material from the Wikipedia article "Donna Shalala."