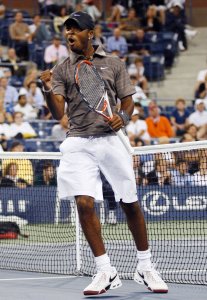 Tennis // 3 years ago
U.S. Open: Roger Federer outlasts Mikhail Youzhny
Roger Federer isn't rolling over early-round competition like a 19-time Grand Slam winner should. But he simply sees it as whatever it takes to get the job done.

Tennis // 3 years ago
2017 Wimbledon: Andy Murray, Rafael Nadal advance to Wimbledon third round
Top-seeded Andy Murray wasted no time on Wednesday at Wimbledon, storming into the third round with a convincing 6-3, 6-2, 6-2 win over Dustin Brown.

Donald Wayne Young (born October 18, 1945 in Houston, Texas) is a former center fielder in Major League Baseball. Young was signed by the St. Louis Cardinals as an amateur free agent in 1963. In his first major league at-bat, he popped up to become the first out in Sandy Koufax's 1965 perfect game. He played only 11 games in 1965, and then spent three years in the minors before coming up to the Cubs again, playing 101 games in the tumultuous 1969 season.

Young was considered an average center fielder as well as a quiet, introspective man. He found himself in the public eye when he made two crucial misplays in the ninth inning of a game against the New York Mets on July 8, 1969. Teammate Ron Santo, often an emotional sort, loudly criticized Young in the clubhouse for his mistakes, and reporters took Santo's rant to the press. Santo drew considerable criticism for his outburst and apologized to Young the next day.

FULL ARTICLE AT WIKIPEDIA.ORG
This article is licensed under the GNU Free Documentation License.
It uses material from the Wikipedia article "Donald Young."
Back to Article
/