U.S. News // 15 hours ago
Jan 6. committee sets next hearing for Oct. 13
The Jan. 6 committee announced Thursday that it would hold its next public hearing Oct. 13.

U.S. News // 3 days ago
Oath Keepers trial begins in Washington, D.C.
Five members of the far-right Oath Keepers group, including its founder, began their trial on Monday, accused of inciting an armed insurrection during the riot at the U.S. Capitol on Jan. 6, 2021.

U.S. News // 3 days ago
Supreme Court declines to hear Mike Lindell's effort to escape Dominion case
The Supreme Court on Monday declined to hear an appeal from MyPillow CEO Mike Lindell in his attempt to throw out a defamation lawsuit filed by a voting company he accused of rigging the 2020 presidential election.

Ladies and gentlemen, I am officially running for president of the United States and we are going to make our country great again

I will do far more for women than Hillary, and I will keep our country safe, something which she will not be able to do -- no strength/stamina

I don't like anything having to do with changing our Second Amendment. We have plenty of rules and regulations

Donald Trump on the campaign trail 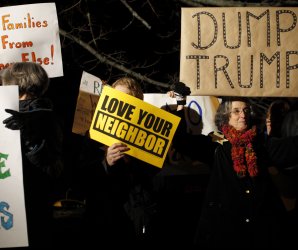 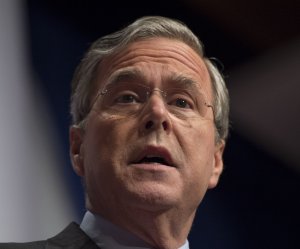 Donald John Trump, Sr. (born June 14, 1946) is an American business magnate, television personality and author. He is the chairman and president of The Trump Organization. Trump is also the founder of Trump Entertainment Resorts, which operates numerous casinos and hotels worldwide. Trump's extravagant lifestyle and outspoken manner have made him a celebrity for years, and more recently with his NBC reality show The Apprentice, where he serves as host and executive producer.

Trump is the fourth of five children of Fred Trump, a real-estate tycoon and developer based in New York City. Donald was inspired to follow his father into real-estate development, and began working on projects for his father's real-estate firm while still in college. Upon his graduation from the Wharton School of the University of Pennsylvania in 1968, Trump formally joined his father's company, Elizabeth Trump & Son. He took the helm in 1971 and renamed it The Trump Organization.

In 2010, Trump expressed interest in becoming a candidate for President of the United States in 2012. On May 16, 2011, he announced he would not run. On May 23, he stated he has not completely ruled out running if no viable Republican Party candidate emerges. In 2011, Trump ranked No. 17 on the Forbes Celebrity 100 list.

FULL ARTICLE AT WIKIPEDIA.ORG
This article is licensed under the GNU Free Documentation License.
It uses material from the Wikipedia article "Donald Trump."