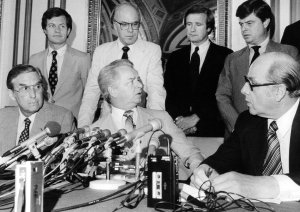 Donald Wayne Riegle Jr. (born February 4, 1938) is an American politician from Michigan, who served for five terms as a Congressman and for three terms as a Senator. He has been Chairman of Government Affairs of APCO Worldwide Inc. since joining it in May 2001. He also served on the Visiting Committee of the Harvard Graduate School of Education and as an Adjunct Professor of the Eli Broad College of Business at Michigan State University.

Senator Riegle served as the Chairman of the Senate Banking Committee, and was a member of the Senate Finance, Commerce, Labor and Human Resources, and Budget Committees. He also chaired subcommittees including Health for Families and the Uninsured, Securities, and Science and Space.

FULL ARTICLE AT WIKIPEDIA.ORG
This article is licensed under the GNU Free Documentation License.
It uses material from the Wikipedia article "Donald Riegle."