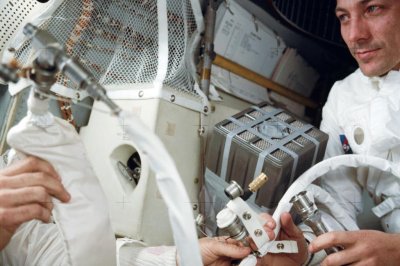 Top News // 4 years ago
The Almanac
On April 13, 1970, an oxygen tank exploded aboard Apollo 13, forcing NASA to abort the crew's planned lunar landing mission and return to Earth.

Top News // 5 years ago
The Almanac
On April 13, 1932, Democrats at a Jefferson Day luncheon accused the Hoover administration of wrecking the economy, plunging millions into misery.

Don Adams (April 13, 1923 – September 25, 2005), born Donald James Yarmy, was an American actor, comedian, game show panelist and occasional director, who in his five decades of television was best known for his role as Maxwell Smart (Agent 86) in the TV situation comedy Get Smart (1965–1970, 1995), for which he also directed and wrote. Adams won three consecutive Emmy Awards for his portrayal of Smart (1967–1969). He also provided the voices for the animated series Tennessee Tuxedo (1963-1966) and Inspector Gadget (1983-1986) as their respective title characters.

Adams was born in New York City, a son of William Yarmy and his wife Consuelo (nee Deiter). His father was a Hungarian Jew and his mother a Roman Catholic of Dutch and Irish heritage. Adams was not raised in either religion, but eventually became Catholic.

Dropping out of New York City's DeWitt Clinton High School in his senior year in 1941, he worked as a theater usher. He later worked as a comic, and taking the stage name of Adams after marrying singer Adelaide (Dell) Efantis, who performed as Adelaide Adams. When they divorced, he kept the stage name, saying he did so because he was tired of being last in alphabetical auditions.

FULL ARTICLE AT WIKIPEDIA.ORG
This article is licensed under the GNU Free Documentation License.
It uses material from the Wikipedia article "Don Adams."
Back to Article
/