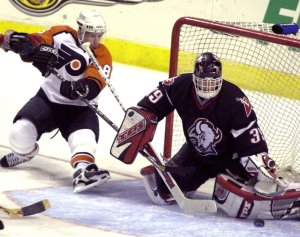 Our medical staff decided that I'm not able to play. It's over

Winning the Cup was everything I thought it would be. During the celebration I just wanted to have fun. I didn't want to talk about it

Winning the Cup was everything I thought it would be. During the celebration I just wanted to have fun. I didn't want to talk about it

He left from the top, and now I can say the same thing

In his 16-season National Hockey League (NHL) career, he played for the Chicago Blackhawks, Buffalo Sabres, Detroit Red Wings, and the Ottawa Senators. During his years in Buffalo, he became one of the league's finest goaltenders, earning him the nickname "The Dominator". His strong play has been credited with establishing European goaltenders in a league widely dominated by North Americans.

Hašek was one of the league's most successful goaltenders of the 1990s and early 2000s. From 1993 to 2001, he won six Vezina Trophies, and in 1998 he became the first goaltender to win consecutive Hart Trophies. During the 1998 Winter Olympics in Nagano, Japan, he led the Czech national ice hockey team to its first and only Olympic gold medal. The feat made him a popular figure in his home country and prompted hockey legend Wayne Gretzky to call him "the best player in the game". While with the Red Wings in 2002, Hašek became the first European starting goaltender to win the Stanley Cup. In the process, he set a record for shutouts in a postseason year.

FULL ARTICLE AT WIKIPEDIA.ORG
This article is licensed under the GNU Free Documentation License.
It uses material from the Wikipedia article "Dominik Hasek."
Back to Article
/