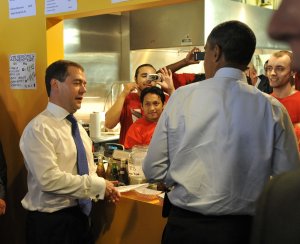 World News // 1 month ago
After shakeup, Russian Duma approves Mikhail Mishustin as next PM
Russian lawmakers approved Mikhail Mishustin as the next prime minister on Thursday in the initial step toward rebuilding Moscow's government, one day after a major shakeup spurred by planned constitutional reforms. 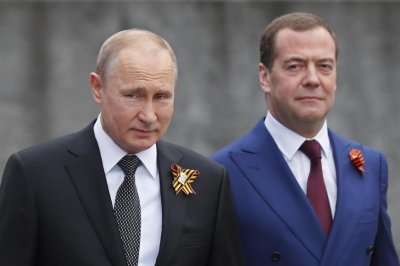 Voices // 8 months ago
Russian involvement in U.S. high-tech businesses is commonplace
One spinoff of the Mueller affair has been the investigation of foreign nationals in the United States, especially those with connections wanting to be introduced to important American businessmen and officials.

Energy News // 1 year ago
Kremlin warns of conflict if Georgia joins NATO
The accession to NATO for Georgia, which hosts one of the world's largest oil pipelines, could lead to regional crises, the Russian prime minister said Monday.

World News // 1 year ago
U.S.-Russia summits of the past produced towering highs, icy lows
When they meet next week in Finland, U.S. President Trump and Russian President Putin will continue a long tradition of summits between the two countries

World News // 1 year ago
Turkey's Erdogan sworn in for new term, with more powers
Recep Tayyip Erdogen, Turkey's president for 15 years, took the oath of office on Monday for a new term, which comes with a whole new set of powers.

I expect to discuss the issue with the U.S. president soon

We will proceed with dialogue to find a mutually acceptable solution to the peace treaty problem, however we cannot but notice attempts by our Japanese partners to doubt Russia's sovereignty of the Kuril Islands

Russia should not be the only one tackling the problem

Any aggression against our citizens will be met with an adequate response, and the future of Russia will be peaceful

Born to a family of academics, Medvedev graduated from the Law Department of Leningrad State University in 1987. He defended his dissertation in 1990 and worked as a docent at his alma mater, now renamed to Saint Petersburg State University, where he taught civil and roman law until 1999. Medvedev's political career began as the election campaign manager and later an adviser of St Petersburg Mayor Anatoly Sobchak. During this time, Medvedev befriended Vladimir Putin. In November 1999, Medvedev was hired in the Russian presidential administration, where he worked as deputy chief of staff. In the 2000 Presidential elections, Medvedev was Putin's campaign manager. On 14 November 2005, Medvedev was appointed First Deputy Prime Minister and was tasked with overseeing National Priority Projects. He also worked as the Chairman of Gazprom's board of directors, a post which he held until 2008.

On 10 December 2007, Medvedev was informally endorsed as a candidate for the forthcoming presidential elections by four political parties: United Russia, Fair Russia, Agrarian Party of Russia and Civilian Power, and was officially endorsed by United Russia on 17 December 2007. Medvedev's candidacy was backed by the popular outgoing President Vladimir Putin, giving a significant boost to his popularity. The 2008 presidential election, held on 2 March 2008, was won by Medvedev with 71.25% of the popular vote, and he was inaugurated as on 7 May 2008.

FULL ARTICLE AT WIKIPEDIA.ORG
This article is licensed under the GNU Free Documentation License.
It uses material from the Wikipedia article "Dmitry Medvedev."
Back to Article
/