Sports News // 3 months ago
Four months to Kentucky Derby and here they come
The old year departs and attention turns to Kentucky Derby 2021 with some of the hopefuls running on the first weekend of the new year; lots of other weekend horse racing action. 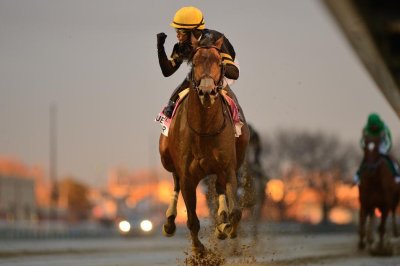 Sports News // 4 months ago
Triple crown contenders head for a showdown
Top-level horse racing rolls on this weekend from Bahrain through North America to Japan and Hong Kong; all the action, previewed right here. 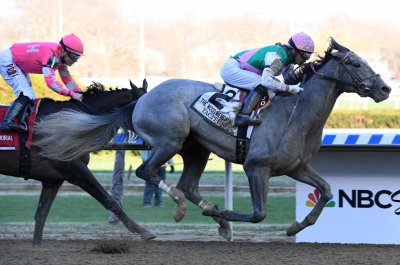 Sports News // 7 months ago
Weekend horse racing offers more than the Kentucky Derby
For the first time ever, the massive Derby week stakes schedule at Churchill Downs runs parallel to the always-impressive Saratoga and Del Mar meetings -- an embarrassment of horse racing riches; Enable tunes up for her

I've raced here all my life. But I got hung wide and I thought I cost my horse the race

Distorted Humor (foaled 1993 in Kentucky) is an American Thoroughbred racehorse and a successful sire.

FULL ARTICLE AT WIKIPEDIA.ORG
This article is licensed under the GNU Free Documentation License.
It uses material from the Wikipedia article "Distorted Humor."
Back to Article
/