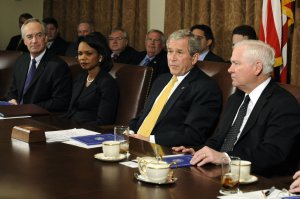 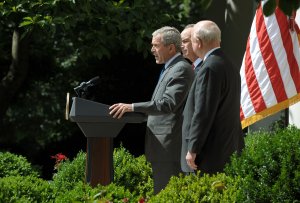 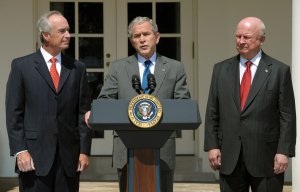 I am also announcing that this listing decision will be accompanied by administrative guidance and a rule that defines the scope of impact my decision will have, in order to protect the polar bear while limiting the unintended harm to the society and economy of the United States

Today I am proud to announce: the eagle has returned

Polar bears are one of nature's ultimate survivors, able to live and thrive in one of the world's harshest environments

Dirk Arthur Kempthorne (born October 29, 1951 in San Diego, California), was the U.S. Secretary of the Interior, who served under President George W. Bush from 2006–2009. A Republican, Kempthorne previously served as Governor and as a U.S. Senator from Idaho. He is reportedly exploring a bid for the Republican Presidential nomination in 2012.

Kempthorne was first elected to public office as mayor of Boise in 1985, where he served for seven years. According to The New York Times, over the course of his career in public service, Kempthorne established a reputation as "a personable leader with a strong understanding of issues."

Kempthorne is notable for his conservative views, particularly on economic issues.

FULL ARTICLE AT WIKIPEDIA.ORG
This article is licensed under the GNU Free Documentation License.
It uses material from the Wikipedia article "Dirk Kempthorne."
Back to Article
/