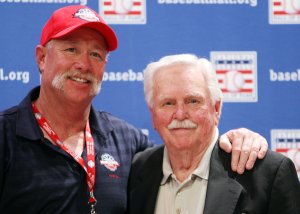 MLB // 11 months ago
Trevor Bauer sets up 'Sandlot' baseball game during MLB break
Cincinnati Reds star Trevor Bauer set up a "Sandlot"-style baseball game, featuring several Major League Baseball players, with proceeds from the event going to MLB staff members who are out of work due the coronavirus.

MLB // 2 years ago
Reds move forward without Price vs. Cardinals
The Price is no longer right in Cincinnati.

MLB // 3 years ago
San Diego Padres' Luis Perdomo beats Cincinnati Reds for first win of season
SAN DIEGO -- Luis Perdomo finally got a win for the Padres Monday night with a lot of help from his teammates.

Richard Hirschfeld Williams (May 7, 1929 – July 7, 2011) was a left fielder, third baseman, manager, coach and front office consultant in Major League Baseball. Known especially as a hard-driving, sharp-tongued manager from 1967–69 and 1971–88, he led teams to three American League pennants, one National League pennant, and two World Series triumphs. He is one of seven managers to win pennants in both major leagues, and joined Bill McKechnie in becoming only the second manager to lead three franchises to the Series. He and Lou Piniella are the only managers in history to lead four teams to seasons of 90 or more wins. Williams was inducted into the Baseball Hall of Fame in 2008 following his election by the Veterans Committee.

FULL ARTICLE AT WIKIPEDIA.ORG
This article is licensed under the GNU Free Documentation License.
It uses material from the Wikipedia article "Dick Williams."
Back to Article
/