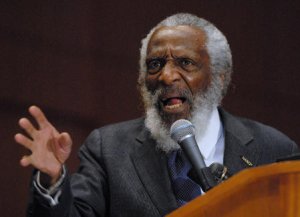 Entertainment News // 3 years ago
Comedian and activist Dick Gregory dead at 84
Comedian, civil rights activist and author Dick Gregory is dead at the age of 84, his longtime publicist announced Saturday.

Gregory is an influential American comic who has used his performance skills to convey to both white and black audiences his political message on civil rights. His social satire changed the way white Americans perceived African American comedians since he first performed in public.

Influenced to stand up for civil rights by his early surroundings of poverty and violence, Gregory became the first comedian to successfully perform for both black and white audiences.

FULL ARTICLE AT WIKIPEDIA.ORG
This article is licensed under the GNU Free Documentation License.
It uses material from the Wikipedia article "Dick Gregory."
Back to Article
/