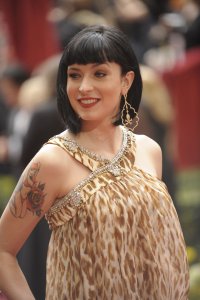 Entertainment News // 4 days ago
Five music biopics to look forward to
Films based on the lives of Aretha Franklin, Elvis Presley and more are set for release in 2021 or are currently in development.

Movies // 4 months ago
Madonna to direct, co-write her own biopic for Universal
Universal Pictures announced it is developing a film based on the life of Madonna, with the pop superstar set to direct the movie herself and co-write the screenplay with Diablo Cody.

TV // 4 months ago
Live-action 'Powerpuff Girls' in development with Diablo Cody, Greg Berlanti
The CW is developing a live-action adaptation of "The Powerpuff Girls" animated series.

Entertainment News // 1 year ago
Alanis Morissette musical to open on Broadway in December
"Jagged Little Pill," a musical based on Alanis Morissette's album of the same name, will open Dec. 5 at Broadhurst Theatre.

Brook Busey (born June 14, 1978), better known by the pen name Diablo Cody, is an American screenwriter, stripper, writer, blogger, journalist, and author. She was first known for her candid chronicling of her year as a stripper in her Pussy Ranch blog and her 2006 memoir, Candy Girl: A Year in the Life of an Unlikely Stripper. Cody achieved critical acclaim worldwide for the script of the 2007 film Juno, winning the Academy Award for Best Original Screenplay.

A dramedy created by Cody, called United States of Tara, based on an idea by Steven Spielberg, was picked up for 12 episodes (including pilot) by the U.S. cable TV network Showtime, the Canadian channel The Movie Network and the Australian Broadcasting Corporation. After four episodes aired, the show was renewed for a second season. Two days after the second season premiere, it was renewed for a third season.

Cody, who took the pen name Diablo Cody (diablo is Spanish for "devil") after repeatedly listening to the song El Diablo by Arcadia while passing through Cody, Wyoming, attended Benet Academy, a Roman Catholic school in Lisle, Illinois. Cody and her older brother Marc grew up in Lemont, Illinois, a suburb of Chicago. Cody was raised Catholic. She graduated from the University of Iowa with a media studies degree. While at the University of Iowa, Cody was a DJ at KRUI 89.7 FM. She also worked in the acquisitions department in the main university library. Her first jobs were doing secretarial work at a Chicago law firm and later proofreading copy for advertisements that played on Twin Cities radio stations.

FULL ARTICLE AT WIKIPEDIA.ORG
This article is licensed under the GNU Free Documentation License.
It uses material from the Wikipedia article "Diablo Cody."
Back to Article
/