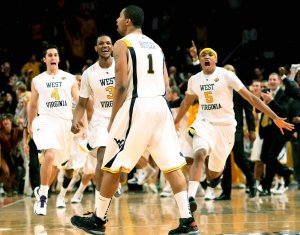 I spoke to my mother and the coaching staff, and we have decided that I should explore my options to pursue a dream that I have had since I was a little kid

Devin Ebanks (born October 28, 1989 in Long Island City, New York) is a basketball player. He is a sophomore forward at West Virginia University. Ebanks is projected as a mid-first-round 2010 NBA Draft prospect.

As a sophomore at Bishop Loughlin High in Brooklyn, New York, Ebanks averaged 18 points, six rebounds and 1.3 assists per game. In his junior season, at St. Thomas More School in Connecticut, he averaged 23 points, five rebounds, four assists, and three steals. In his senior season, Ebanks recorded an average of 23 points, 10 rebounds and 5 assists per game at More. He scored over 1,000 points in his two seasons at St. Thomas More.

Ebanks received various honors while a prep player in high school. These honors included the Jordan Brand Classic All-Star Game in New York, playing AAU basketball, and being one of 30 players selected for the 2007 USA Basketball Development Festival at the U.S. Olympic Training Center in Colorado Springs, Colorado. While at the camp, Ebanks averaged 28.2 points and 4.8 rebounds per game.

FULL ARTICLE AT WIKIPEDIA.ORG
This article is licensed under the GNU Free Documentation License.
It uses material from the Wikipedia article "Devin Ebanks."