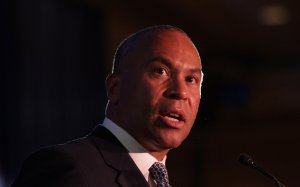 U.S. News // 1 year ago
Sanders overwhelms foes in Nevada caucuses
Sen. Bernie Sanders held more than 40 percent of state delegates with 60 percent of precincts tallied in Nevada on Sunday, while Pete Buttigieg's campaign requested a review of the results.

U.S. News // 1 year ago
Front-runners Buttigieg, Sanders come under fire at N.H. Democratic debate
Surging presidential front-runners Pete Buttigeig and Bernie Sanders came in for sustained criticism from their rivals, as well as from each other, Friday night at the eighth Democratic debate in New Hampshire.

U.S. News // 1 year ago
Buttigieg holds slim lead over Sanders in Iowa
Pete Buttigieg held onto the slightest of leads over fellow presidential contender Bernie Sanders Wednesday night with only a few precincts left uncounted in the Iowa Democratic primary.

U.S. News // 1 year ago
Democratic field of 6 will take stage in 7th debate Tuesday night
Just six Democrats will take the stage in Iowa on Tuesday night for the final primary debate before the 2020 Iowa caucuses.

U.S. News // 1 year ago
Cory Booker drops out of presidential race with 'no path to victory'
New Jersey Sen. Cory Booker, one of the first Democrats to enter the 2020 presidential race, announced Monday he's dropping out because he no longer sees a path to the party nomination.

Our success depends on the stability and reliability of the commitments the federal government has made to us. Any retreat in those commitments could have devastating effects on our progress

Patrick: Superdelegates will back winner Mar 16, 2008

As I said to (Maguire's widow) when we spoke on the phone just a moment ago, none of this is going to bring Jack back ... but what we have done and what we must do is all we can to regain the public's confidence in a part of the criminal justice system which is vital to a successful criminal justice program

Born and raised by a single mother on the South Side of Chicago, Patrick won a scholarship to Milton Academy in Massachusetts in the eighth grade. He went on to attend Harvard College and Harvard Law School, where he was President of the Harvard Legal Aid Bureau. After graduating he practiced law with the NAACP Legal Defense and Educational Fund. He later joined a Boston law firm, where he was named a partner at the age of 34. In 1994, President Bill Clinton appointed Patrick Assistant Attorney General for the Civil Rights Division of the Department of Justice, where he worked on issues including racial profiling and police misconduct. Patrick returned to Boston in 1997 to work in private law. In the following years he worked as general counsel for Texaco in New York City and Coca-Cola in Atlanta, which were both facing large racial discrimination settlements.

When he announced his candidacy for the 2006 gubernatorial election in Massachusetts, Patrick was initially seen as a dark horse candidate, but ultimately won the Democratic primary against veteran politicians Thomas Reilly and Chris Gabrielli. He went on to defeat Republican Lieutanent Governor Kerry Healey in the general election, and was inaugurated in January 2007. In his first term, Patrick oversaw the implementation of the state's 2006 health care reform program, increased funding to education and life sciences, won a federal Race to the Top education grant, passed an overhaul of state transportation industries to create the Massachusetts Department of Transportation, worked with the legislature to defend the legality of same-sex marriage, and increased the state sales tax from 5% to 6.25%. Under Patrick, Massachusetts joined the Regional Greenhouse Gas Initiative (RGGI) in an effort to reduce greenhouse gas emissions and greatly expanded services to veterans. His two legislative battles to implement casino gambling failed: he could not win the approval of the House of Representatives in March 2008, and he vetoed a bill passed by the legislature in August 2010 for going too far.

FULL ARTICLE AT WIKIPEDIA.ORG
This article is licensed under the GNU Free Documentation License.
It uses material from the Wikipedia article "Deval Patrick."
Back to Article
/