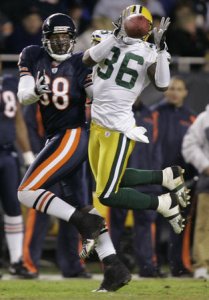 Desmond Darice Clark (born April 20, 1977 in Lakeland, Florida) is an American football tight end for the Chicago Bears of the National Football League. He was originally drafted by the Denver Broncos in the sixth round of the 1999 NFL Draft. He played college football at Wake Forest.

When Clark was 12 years old, he saved a cat from being run over by a car by diving into a street, grabbing it, and getting out of the way. Clark has often pointed to this point in his life as the inspiration for joining the NFL.

Clark attended Kathleen High School, where he played football as a quarterback, free safety, and return specialist. He was also the holder for former Chicago Bears place kicker Paul Edinger. He also played basketball and baseball during his high school years. His brother, Dominique Davis, played Quarterback for the Boston College Eagles.

FULL ARTICLE AT WIKIPEDIA.ORG
This article is licensed under the GNU Free Documentation License.
It uses material from the Wikipedia article "Desmond Clark."
Back to Article
/