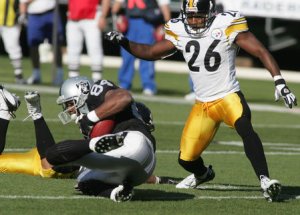 Trevor "Big Play" Deshea Townsend (born September 8, 1975) is a defensive back who is currently playing for the Pittsburgh Steelers. He played college football for the Alabama Crimson Tide and was selected by the Steelers in the fourth round (117th overall) in the 1998 NFL Draft.

A native of Batesville, Mississippi, Deshea played high school football for the South Panola Tigers, where he was the teammate of fellow future Alabama Crimson Tide star Dwayne Rudd. Townsend played quarterback at South Panola and led the team to the 1994 Mississippi State 5A championship and an undefeated 15-0 record.

Along with Rudd, Townsend continued his career in college at the University of Alabama where both became members of the Theta Delta Chapter of the Phi Beta Sigma Fraternity, Inc., in 1995. He majored in business management.

FULL ARTICLE AT WIKIPEDIA.ORG
This article is licensed under the GNU Free Documentation License.
It uses material from the Wikipedia article "Deshea Townsend."
Back to Article
/