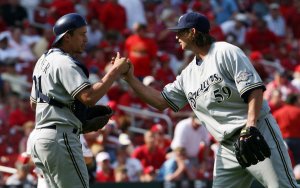 Turnbow played baseball at Franklin High School in Franklin, Tennessee, where he compiled a 30-4 record over four years. In his senior year, he posted a Franklin High single-season best 0.77 ERA. The school retired Turnbow's number (20) in 2001, and he is currently the only baseball player to have been awarded that honor. He was drafted in 1997 by the Philadelphia Phillies in the 5th round of the Major League Baseball Draft. He was then acquired by the Los Angeles Angels of Anaheim in the 1999 Rule V Draft. In October 2003, Turnbow became the first major league player to test positive for a banned steroid. The positive test came during tryouts for USA Baseball's Olympic qualifying team. He did not face sanctions from Major League Baseball, because they did not begin testing for or penalizing steroid use until the 2004 season. He was banned for two years from international competition. He got out to a promising start in his career, even representing the Brewers at the 2006 All-Star Game. Immediately after that game, however, he suffered a Rick Ankiel-esque loss of command and control.

Claimed off waivers by the Milwaukee Brewers following the 2004 season, Turnbow worked with Brewers pitching coach Mike Maddux before the 2005 season to help control his fastball, which routinely clocks at 97-98 mph. Turnbow became the Brewers' closer in April 2005 and finished the 2005 season with 39 saves, matching the team record set previously by Dan Kolb in 2004, and setting personal bests with a 1.74 ERA and 7-1 record in 67.1 innings pitched. Turnbow was rewarded with a three-year $6.5 million contract, which ran through 2008 and "bought out" his first two seasons of arbitration eligibility.

FULL ARTICLE AT WIKIPEDIA.ORG
This article is licensed under the GNU Free Documentation License.
It uses material from the Wikipedia article "Derrick Turnbow."
Back to Article
/