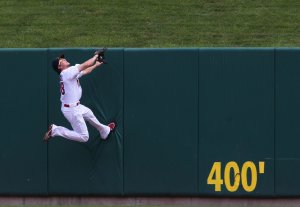 We've had a family emergency. It has to do with our daughter

You break your wrist and you think that's a big deal

It's nice to get it over and put it behind me. Now I can focus on baseball and winning games

When the trade was presented to me, I felt for me and my family the best thing to do was to stay here

I understand what Jim (Hendry) is trying to do over here

Lee was born on September 6, 1975. Leon Lee is his father and Leron Lee is his uncle. Each of them played professional baseball in Japan. During his elementary years Lee lived in Japan, and during his high school years he often lived there during his summer breaks. Lee was born in Sacramento, California. Lee played Little League Baseball at Whitney Little League and graduated from El Camino High School in 1993.

Lee was drafted in the first round (14th overall) of the 1993 Major League Baseball Draft by the San Diego Padres, and made his major league debut on April 28, 1997.

FULL ARTICLE AT WIKIPEDIA.ORG
This article is licensed under the GNU Free Documentation License.
It uses material from the Wikipedia article "Derrek Lee."