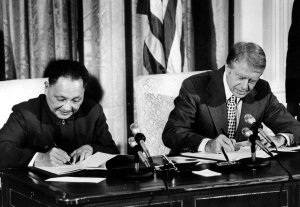 World News // 1 month ago
Ezra Vogel, Harvard East Asia scholar, dies at age 90
Ezra Vogel, a leading U.S. scholar at Harvard who witnessed first-hand East Asia's economic rise, died of complications from surgery Sunday, according to his family. He was 90.

Voices // 6 months ago
China is becoming increasingly assertive, not just regarding Hong Kong
China's enforcement of a new security law in Hong Kong marks the de facto end of the "one country, two systems" model. This has repercussions that go far beyond Hong Kong.

Voices // 1 year ago
Hong Kong's 'one country, two systems' model is on its last legs
Protest organizers in Hong Kong claim that nearly 2 million people took to the streets on Sunday as demonstrations continued over proposed changes to extradition law.

World News // 3 years ago
Reports: China detains billionaire insurance mogul
Chinese authorities reportedly have detained the chairman of insurance and financial giant Anbang, one month after he was accused of irregularities.

The Middle East has oil, but China has rare earth

It doesn't matter whether the cat is black or white, as long as it catches mice

The Middle East has oil, and China has rare earths

Deng Xiaoping (IPA: ( listen); 22 August 1904  – 19 February 1997) was a Chinese politician, statesman, theorist, and diplomat. As leader of the Communist Party of China, Deng was a reformer who led China towards a market economy. While Deng never held office as the head of state, head of government or General Secretary of the Communist Party of China (historically the highest position in Communist China), he nonetheless served as the paramount leader of the People's Republic of China from 1978 to 1992.

Born into a peasant background in Guang'an, Sichuan, China, Deng studied and worked in France in the 1920s, where he came under the influence of Marxism. He joined the Communist Party of China in 1923. Upon his return to China he worked as a political commissar in rural regions and was considered a "revolutionary veteran" of the Long March. Following the founding of the People's Republic of China in 1949, Deng worked in Tibet and other southwestern regions to consolidate Communist control. He was also instrumental in China's economic reconstruction following the Great Leap Forward in the early 1960s. His economic policies were at odds with the political ideologies of Chairman Mao Zedong. As a result, he was purged twice during the Cultural Revolution but regained prominence in 1978 by outmaneuvering Mao's chosen successor, Hua Guofeng.

Inheriting a country fraught with social and institutional woes resulting from the Cultural Revolution and other mass political movements of the Mao era, Deng became the core of the "second generation" of Chinese leadership. He is considered "the architect" of a new brand of socialist thinking, having developed Socialism with Chinese characteristics and led Chinese economic reform through a synthesis of theories that became known as the "socialist market economy". Deng opened China to foreign investment, the global market, and limited private competition. He was generally credited with developing China into one of the fastest growing economies in the world for over thirty years and raising the standard of living of hundreds of millions of Chinese.

FULL ARTICLE AT WIKIPEDIA.ORG
This article is licensed under the GNU Free Documentation License.
It uses material from the Wikipedia article "Deng Xiaoping."
Back to Article
/