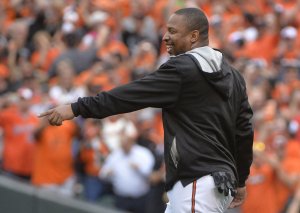 Sports News // 6 years ago
Free-agent OF Delmon Young arrested for battery
Free-agent outfielder Delmon Young was arrested and charged with battery on Sunday night after allegedly threatening to kill a hotel valet in Miami.

Delmon Damarcus Young (born September 14, 1985 in Montgomery, Alabama) is a Major League Baseball outfielder for the Detroit Tigers . He is the younger brother of former major league outfielder and first baseman Dmitri Young.

Despite having little major league experience, Young has already received a reputation around baseball for his strong and accurate throwing arm in the outfield. Don Zimmer, now a consultant with the Rays, has compared Young's arm to that of Jesse Barfield or Raúl Mondesí. In terms of hitting ability, at 6'3", 205 pounds, he presents an intimidating and strong plate presence, and his potential has often been compared to that of Albert Belle.

FULL ARTICLE AT WIKIPEDIA.ORG
This article is licensed under the GNU Free Documentation License.
It uses material from the Wikipedia article "Delmon Young."