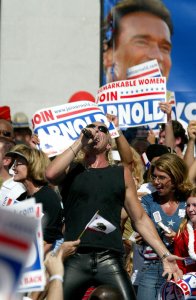 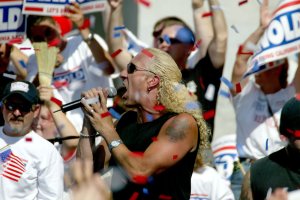 TV // 2 years ago
'Sharknado' trailer has dinosaurs, knights, cowboys
Syfy has released another trailer for its TV movie "The Last Sharknado: It's About Time."

Top News // 4 years ago
The Almanac
On March 15, 1939, German troops, occupying the Czech provinces in the name of Adolf Hitler, entered Prague in triumph to the hisses and catcalls of the people.

I had an opportunity, I had a microphone and I could make noise and I could help raise some hell, and why not

Not because they necessarily deserve it, but because ultra-conservative, short-sighted judgmental a--holes assume they do

Not because they necessarily deserve it, but because ultra-conservative, short-sighted judgmental a--holes assume they do

David Daniel "Dee" Snider (born March 15, 1955) is an American singer-songwriter, screenwriter, radio personality, and actor. Snider is most famous for his role as the frontman of the heavy metal band Twisted Sister. He was ranked 83 in the Hit Parader's Top 100 Metal Vocalist of All Time.

Born in Astoria, New York, Snider grew up in nearby Baldwin and graduated from Baldwin High School in 1973. As a child he sang in a church choir, several school choruses, and Baldwin HS Concert Choir. He also was selected for the All State Chorus by singing. While in eighth grade, Snider was in a Black Sabbath cover band.

In early 1976, Snider joined the recently formed Twisted Sister and became the sole songwriter of the band thereafter. The group released their first studio album, Under the Blade, in September 1982 and developed a following in the UK. Less than a year later, Twisted Sister released their sophomore effort, You Can't Stop Rock 'n' Roll. Their third album, Stay Hungry, hit shelves on May 10, 1984. This would become the band's most successful record with the hits "We're Not Gonna Take It" and "I Wanna Rock." To emphasize the "twisted sister" image, Snider adopted a trademark persona of metal-inspired drag with a long blond wig, an excessive amount of eye shadow and rouge, and bright red lipstick.

FULL ARTICLE AT WIKIPEDIA.ORG
This article is licensed under the GNU Free Documentation License.
It uses material from the Wikipedia article "Dee Snider."
Back to Article
/