Top News // 4 months ago
The Almanac
On April 1, 1945, U.S. forces swarmed ashore on the Japanese island of Okinawa to begin what would be one of the longest battles of World War II.

Entertainment News // 7 months ago
Billie Lourd sends love to grieving fans on Christmas
Billie Lourd, the daughter of late "Star Wars" icon Carrie Fisher, showed her support for those grieving loved ones during the holidays. 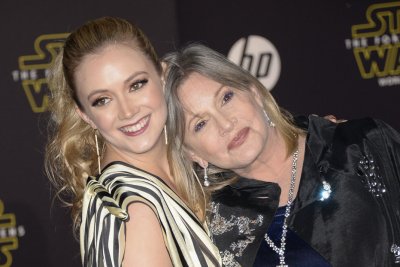 Entertainment News // 3 years ago
Billie Lourd on upholding Carrie Fisher's legacy: 'It's a lot of pressure'
Billie Lourd discussed the challenges of honoring late mom Carrie Fisher and grandmother Debbie Reynolds while forging her own path.

Debbie Reynolds (born April 1, 1932) is an American actress, singer, and dancer and mother of actress/author Carrie Fisher. Reynolds' marriage to Eddie Fisher ended in divorce in 1959 when he went to marry her former (and later) friend Elizabeth Taylor. She is also a collector of film memorabilia.

Debbie Reynolds was born Mary Frances Reynolds in El Paso, Texas, the second child of Maxine N. (née Harmon; 1913–1999) and Raymond Francis Reynolds (1903–1986), who was a carpenter for the Southern Pacific Railroad. Her parents were of Irish ancestry. Reynolds was a Girl Scout and a troop leader (a scholarship in her name is offered to high-school age Girl Scouts). Her family moved to Burbank, California, in 1939, and she was raised in a strict Nazarene faith. At age 16, while a student at Burbank's John Burroughs High School, Reynolds won the Miss Burbank Beauty Contest, a contract with Warner Brothers, and acquired a new first name.

Debbie Reynolds regularly appeared in movie musicals during the 1950s and had several hit records during the period. Her song "Aba Daba Honeymoon" (featured in the 1950 film Two Weeks with Love as a duet with Carleton Carpenter) was a top-three hit in 1951. Her most high-profile film role was in Singin' in the Rain (1952) as Kathy Selden. In Bundle of Joy (1956) she appeared with her then-husband, Eddie Fisher.

FULL ARTICLE AT WIKIPEDIA.ORG
This article is licensed under the GNU Free Documentation License.
It uses material from the Wikipedia article "Debbie Reynolds."
Back to Article
/