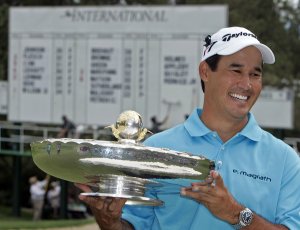 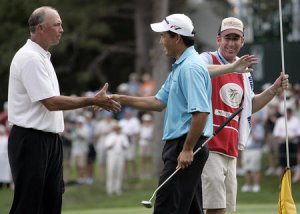 I think I only found trouble on one hole, and I was able to make a par there so overall, I'm really happy

Wilson was born in Kaneohe, Hawaii. He turned professional in 1992 after graduating from Brigham Young University and has won six times on the Japan Golf Tour and once on the PGA Tour. After a poor 2009 season Wilson lost his PGA Tour playing rights. He regained full tour status in 2010 while starting outside top 150 from previous year’s money list.

FULL ARTICLE AT WIKIPEDIA.ORG
This article is licensed under the GNU Free Documentation License.
It uses material from the Wikipedia article "Dean Wilson."
Back to Article
/