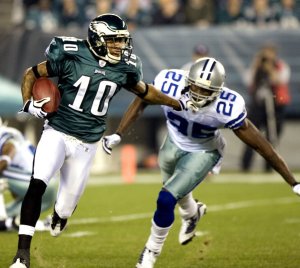 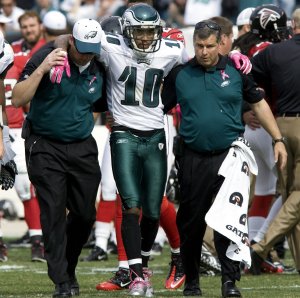 DeSean Jackson (born December 1, 1986) is an American football wide receiver for the Philadelphia Eagles of the National Football League. He was drafted by the Eagles in the second round of the 2008 NFL Draft. He played college football at the University of California, Berkeley. He is the first player to make the Pro Bowl for two different positions.

Jackson attended Long Beach Polytechnic High School, the same high school as future Eagles teammate Winston Justice and many other current NFL players. He became one of the top wide receiver recruits in the nation, with many collegiate football programs pursuing his services. He was named the 2004 Glenn Davis Award winner by the Los Angeles Times as Southern California's player of the year. He also played baseball and was scouted by both the Tampa Bay Rays and Philadelphia Phillies in his senior year.

Jackson caught 60 passes for 1,075 yards for 15 touchdowns his senior year, leading the Jack Rabbits to a CIF Southern Section championship. He was pressed into service last minute as a defensive back in the section title game against Los Alamitos High School, responding with two interceptions, one which he returned 68 yards for a touchdown to help fuel Long Beach Poly's 21–6 victory.

FULL ARTICLE AT WIKIPEDIA.ORG
This article is licensed under the GNU Free Documentation License.
It uses material from the Wikipedia article "DeSean Jackson."
Back to Article
/