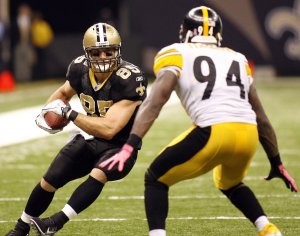 Odd News // 2 years ago
Professor holds baby so student can take notes
A Georgia college professor's kind gesture is going viral after he carried a student's baby during his lecture so the student could take notes.

Although further studies are needed all over France to confirm the strong decrease in smoking related deaths over time, these statistics show the same tendency professionals have already observed in Italy, Ireland and Scotland when these countries introduced their own bans on tobacco

The two flights by Gov. Sanford were in violation of the South Carolina Code of Regulations

John David Thomas (born July 5, 1983 in Plainview, Texas) is an American football tight end for the New Orleans Saints of the National Football League. He was drafted by the New England Patriots in the third round of the 2006 NFL Draft. He played college football at Texas.

Thomas attended Frenship High School in Wolfforth, Texas, and helped Frenship reach the state semi-finals in its division in 2000. Thomas excelled at linebacker, running back and tight end for the Tigers, leading some to question as to which position he would play in college. After a heated recruiting battle with Texas Tech University, the University of Texas secured a pledge from Thomas to play tight end for the Longhorns.

At Texas, Thomas broke school records for receptions, touchdowns, and yards by a tight end, as well as for receptions in a single game. He was also a candidate for the John Mackey Award, given to the nation's best tight end, and for the Draddy Trophy, for academic merit by a student athlete. In both 2004 and 2005 Thomas was named to the Academic All-Big 12 First Team for accomplishments in the classroom. Long a favorite of quarterback Vince Young, Thomas played a prominent role in the Longhorn's 41-38 National Championship upset of then #1 USC in the 2006 Rose Bowl, hauling in a game-high 10 receptions for 88 yards. He majored in kinesiology.

FULL ARTICLE AT WIKIPEDIA.ORG
This article is licensed under the GNU Free Documentation License.
It uses material from the Wikipedia article "David Thomas."
Back to Article
/