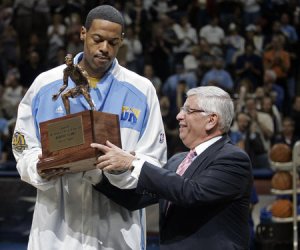 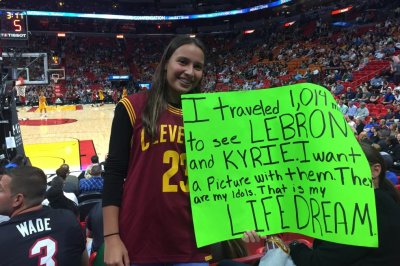 NBA // 3 years ago
Cleveland Cavaliers crush fans by sitting out LeBron James, Kyrie Irving in Miami
Gabriela Hernandez was in a heap of tears last Christmas as she opened up a big box from her parents in Dorado, Puerto Rico.

Top News // 4 years ago
The Almanac
On Sept. 22, 1975, U.S. President Gerald Ford escaped a second assassination attempt in 17 days, this one by self-proclaimed revolutionary Sara Jane Moore, who tried to shoot him as he walked from a San Francisco hotel.

Franklin was truly one of the innovators in our league

As a premier entertainment destination with a new, state-of-the-art arena and a wide array of hospitality options, Orlando is an obvious and compelling choice to host this celebration of our game

I would say that we're committed to small market teams

The Hornets have a strong management team in Hugh Weber, Dell Demps and Monty Williams, and we have recruited Jac Sperling -- a seasoned sports executive and New Orleans native -- to be the team's chairman and governor

David Joel Stern (born September 22, 1942) is the commissioner of the National Basketball Association. He began his relationship with The Association in 1966 as outside counsel, joined the NBA in 1978 as General Counsel, and became the league's Executive Vice President in 1980. He became Commissioner in 1984 succeeding Larry O'Brien. He is credited with increasing the popularity of the NBA in the 1990s and 2000s. Stern has served on the Rutgers University Board of Overseers and currently serves as Chair of the Board of Trustees of Columbia University. He is also a member of the Council on Foreign Relations.

David Stern was born on September 22, 1942 in New York City, New York. He grew up in Teaneck, New Jersey in a Jewish family, and is a graduate of Teaneck High School. Stern attended Rutgers University, where in 1960 he pledged to the Sigma Delta Chapter of Sigma Alpha Mu Fraternity. He graduated as B- dean's-list history student in 1963 and graduated from Columbia Law School in 1966, and was admitted to the bar in New York later that year after passing the state's bar examination.

His first association with the NBA in 1966 was as an outside counsel at Proskauer Rose. In 1978, Stern became the NBA's General Counsel under Larry O'Brien. By 1980, he was Executive Vice President of the NBA. During this time, two landmark decisions were reached with the NBA Players' Association: drug testing and team salary cap. The drug testing dealt with the perception that most basketball players used drugs, that the NBA admitted it had a problem, and it was cleaning it up. The salary cap created a revenue-sharing system where owner and player were effectively partners. Both of these agreements solidified Stern's standing inside NBA circles.

FULL ARTICLE AT WIKIPEDIA.ORG
This article is licensed under the GNU Free Documentation License.
It uses material from the Wikipedia article "David Stern."
Back to Article
/