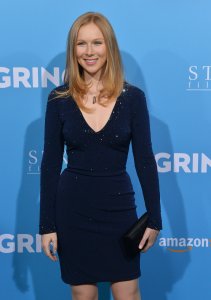 TV // 5 months ago
Helena Bonham Carter, Phoebe Dynevor to appear in 'Call My Agent!'
AMC Networks said its streaming service, Sundance Now, will air in 2022 the British remake of the French comedy series, "Call My Agent! "

TV // 10 months ago
David Oyelowo to co-star with Gugu Mbatha-Raw in BBC drama
David Oyelowo has landed a lead role in the psychological thriller, "The Girl Before."

Entertainment News // 1 year ago
What to stream Christmas weekend: 'Wonder Woman 1984,' 'Soul'
Gal Gadot is back as Wonder Woman, Jamie Foxx voices the lead in Disney and Pixar's next animated feature and Shonda Rhimes has a new period drama premiering this holiday weekend.

TV // 1 year ago
'Briarpatch': USA Network cancels Rosario Dawson series after one season
"Briarpatch," an anthology series based on the Ross Thomas novel, won't return for a second season on USA Network.

Movies // 1 year ago
Halle Berry's 'Bruised,' 'Ammonite' with Kate Winslet set for TIFF 2020
The 2020 Toronto International Film Festival announced its lineup on Wednesday and explained how the event will proceed from Sept. 10 to 19 amid the COVID-19 pandemic.

David Oyetokunbo Oyelowo (/ɵˈjɛlɵwoʊ/ ə-YEL-ə-woh; born 1 April 1976)[1] is an English actor, producer, director, and writer. He has played supporting roles in the films Rise of the Planet of the Apes (2011), Middle of Nowhere (2012), Lincoln (2012), and garnered praise for portraying Louis Gaines in The Butler (2013). On television, he played MI5 officer Danny Hunter in the British series Spooks (2002–04), and as of 2014[update], provides the voice of Imperial Security Bureau agent Kallus on the animated series Star Wars Rebels.[2] In 2014, Oyelowo played Martin Luther King, Jr. in the biographical drama film Selma, for which he received a Golden Globe Award nomination for Best Actor (Drama).[3] Also in 2014, he starred in the HBO movie Nightingale, for which he won a Critics' Choice Television Award for Best Actor in a Movie/Miniseries. and is also nominated for a Primetime Emmy Award.

FULL ARTICLE AT WIKIPEDIA.ORG
This article is licensed under the GNU Free Documentation License.
It uses material from the Wikipedia article "David Oyelowo."