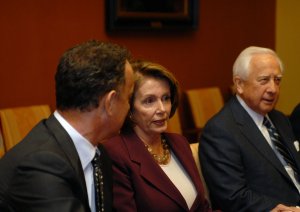 The wind dropped, it was like the parting of the waters of the Red Sea

David Gaub McCullough (pronounced /məˈkʌlə/; born July 7, 1933) is an American author, narrator, historian, and lecturer. He is a two-time winner of the Pulitzer Prize and the National Book Award and a recipient of the Presidential Medal of Freedom, the United States' highest civilian award.

Born and raised in Pittsburgh, McCullough earned a degree in English literature from Yale University. His first book was The Johnstown Flood (1968); and he has since written eight more on such topics as Harry S Truman, John Adams, and the Brooklyn Bridge. McCullough has also narrated multiple documentaries, as well as the 2003 film Seabiscuit; and he hosted American Experience for twelve years. McCullough's two Pulitzer Prize-winning books, Truman and John Adams, have been adapted by HBO into a TV film and a mini-series, respectively. McCullough's most recent work, The Greater Journey, about Americans in Paris from the 1830s to the 1900s, was released on May 24, 2011.

McCullough was born in Pittsburgh, Pennsylvania, the son of Ruth (née Rankin) and Christian Hax McCullough. He is of Scotch-Irish descent. He was educated at Linden Avenue Grade School and Shady Side Academy, in his hometown of Pittsburgh, Pennsylvania. One of four sons, McCullough had a "marvelous" childhood with a wide range of interests, including sports and drawing cartoons. McCullough's parents and his grandmother, who read to him often, introduced him to books at an early age. His parents talked openly about history, a topic he feels should be discussed more often. McCullough "loved school, every day"; he contemplated many career choices ranging from architect, actor, painter, writer, lawyer, and even attending medical school.

FULL ARTICLE AT WIKIPEDIA.ORG
This article is licensed under the GNU Free Documentation License.
It uses material from the Wikipedia article "David McCullough."