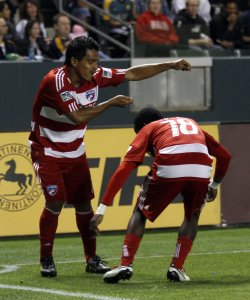 Fereira began his professional career in 1997 with Colombian Primera B club Expresso Rojo. By 1999 he had joined Real Caratagena helping them win a league title. In 2000, he joined America de Cali in the first division helping the team win three consecutive championships from 2000 to 2002 before moving to Brazilian club Atletico Paranaense in 2005. During his stay with Atletico Paranaense from 2005 to 2008, he appeared in 179 games starting in 175 of them while scoring 38 goals and recording 42 assists. Ferreira also appeared in the first-ever USA-Brazil Challenge game against his current team, FC Dallas in Curitiba, Brazil on March 7, 2007. From February to June 2008, David was on loan to club Al-Shabab in Dubai, United Arab Emirates making 12 appearances and helping the team win the league title before returning to Atletico Paranaense where he was loaned to FC Dallas on February 24, 2009. He was named MLS MVP on November 19, 2010 after scoring 8 goals and adding 13 assists during the regular season. On December 20, 2010, it was announced that FC Dallas had signed him to a multi-year contract, purchasing his rights from Atletico Paranaense.

FULL ARTICLE AT WIKIPEDIA.ORG
This article is licensed under the GNU Free Documentation License.
It uses material from the Wikipedia article "David Ferreira."
Back to Article
/