Voices // 1 year ago
White nationalism, born in the USA, is now a global terror threat
The recent massacre of 50 Muslim worshipers at mosques in New Zealand is the latest confirmation that white supremacy is a danger to democratic societies.

U.S. News // 1 year ago
Fields guilty of murder in Charlottesville rally death
A Virginia jury issued a guilty verdict for a man who intentionally drove into a crowd during a counter-protest of a white nationalist rally in Charlottesville.

U.S. News // 1 year ago
Prospective jurors interviewed in 'Unite the Right' rally murder case
Jury selection began Monday in the trial of the Ohio man accused of intentionally driving into a crowd during a "Unite the Right" rally, killing a woman 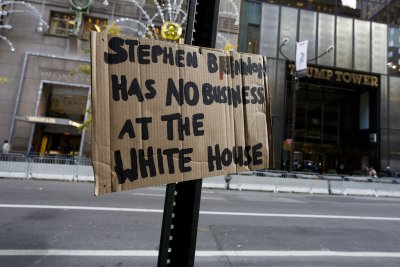 I know Derek Black is going to fight for his constitutional liberties. That's why I'm here, because I want to assist Derek

David Ernest Duke (born July 1, 1950) is an American white nationalist activist and writer, and former Republican Louisiana State Representative. He was also a former candidate in the Republican presidential primaries in 1992, and in the Democratic presidential primaries in 1988. Duke has unsuccessfully run for the Louisiana State Senate, U.S. Senate, U.S. House of Representatives, and Governor of Louisiana.

A former Grand Wizard of the Knights of the Ku Klux Klan, Duke describes himself as a racial realist, asserting that "all people have a basic human right to preserve their own heritage." He is a strong advocate of opposition to Zionism as well as what he asserts to be Jewish control of the Federal Reserve Bank, the federal government and the media. Duke supports anti-immigration, both legal and illegal, preservation of what he labels Western culture and traditionalist Christian "family values", strict Constitutionalism, abolition of the Internal Revenue Service, voluntary racial segregation, ardent anti-communism and white separatism.

Duke was born in Tulsa, Oklahoma to David H. Duke and Alice Maxine Crick. As the son of an engineer for Shell Oil, Duke frequently moved with his family around the world. They lived a short time in the Netherlands, before settling in Louisiana. In the late 1960s, Duke met the leader of the white supremacist National Alliance, William Pierce, who would remain a life-long influence. Duke joined the Ku Klux Klan in 1967.

FULL ARTICLE AT WIKIPEDIA.ORG
This article is licensed under the GNU Free Documentation License.
It uses material from the Wikipedia article "David Duke."
Back to Article
/