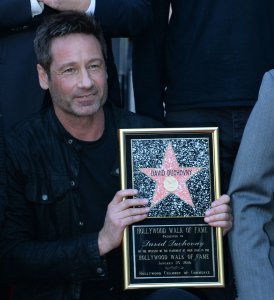 Top News // 3 years ago
The Almanac
On August 7, 1998, terrorists' bombs detonated within minutes of each other outside of U.S. embassy buildings in Nairobi, Kenya, and Dar es Salaam, Tanzania.

TV // 4 years ago
David Duchovny on 'X-Files' Season 11: 'Mulder's at death's door...That can't last'
David Duchovny says he is happy Season 11 of The X-Files will include 10 episodes and spend more time on Mulder and Scully's strange cases than offering a crash course on what the series is about.

TV // 4 years ago
Gillian Anderson on 'X-Files' future: 'I think this will be it for me'
Gillian Anderson says she does not intend to continue playing FBI Special Agent Dana Scully past the upcoming, 11th season of "The X-Files."

TV // 4 years ago
'The X-Files': Annabeth Gish to return in Season 11
Annabeth Gish will reprise Monica Reyes in a new season of "The X-Files" revival starring David Duchovny and Gillian Anderson.

Top News // 4 years ago
The Almanac
On August 7, 1963, Jacqueline Kennedy becomes the first sitting U.S. first lady to give birth since Frances Folsom Cleveland in 1897.

I love working with Showtime, Tom Kapinos, and the cast

My history from 'Twin Peaks,' I'm the one usually wearing the dress

David William Duchovny (born August 7, 1960) is an American actor, writer and director. He has won Golden Globe awards for his work as FBI Special Agent Fox Mulder on The X-Files and as Hank Moody on Californication.

Duchovny was born in New York City, New York, the son of Margaret "Meg" (née Miller), a school administrator and teacher, and Amram Ducovny (1927–2003), a writer and publicist who worked for the American Jewish Committee. David's paternal grandparents were Jewish immigrants from Russia, and his mother is a Lutheran immigrant from Scotland. His father dropped the h in his last name to avoid the sort of mispronunciations he encountered while serving in the Army.

Duchovny attended Grace Church School and The Collegiate School For Boys; both are in Manhattan. He graduated from Princeton University in 1982 with a Bachelor of Arts in English Literature. He was a member of the Charter Club, one of the university's eating clubs. In 1982, his poetry received an honorable mention for a college prize from the Academy of American Poets. The title of his senior thesis was The Schizophrenic Critique of Pure Reason in Beckett's Early Novels. Duchovny played a season of junior varsity basketball as a shooting guard and center field for the varsity baseball team.

FULL ARTICLE AT WIKIPEDIA.ORG
This article is licensed under the GNU Free Documentation License.
It uses material from the Wikipedia article "David Duchovny."