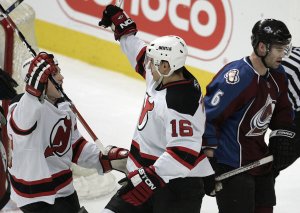 David Clarkson (born 10 September 1985 in Bellshill, Scotland) is a Scottish footballer who plays for Bristol City as a striker.

Clarkson made his debut for Motherwell in December 2002, scoring his first goal nine minutes into his first starting appearance for the club, at home in an SPL match against Partick Thistle on 2 January 2003. Clarkson went on to score three goals in his first season, and was a regular from the following season, playing in the majority of matches. He scored 13 goals for Motherwell in the 2007–08 season, during which his uncle, Phil O'Donnell, died from heart failure during a match against Dundee United. Clarkson was later voted player of the year. Clarkson went on to wear O'Donnell's old squad number, 10, during the 2008–09 season.

On 29 June 2009, Clarkson joined Bristol City and signed a three-year contract for an undisclosed fee, reportedly £800,000.He was persuaded to make the move following support from Daniel Hewitt and Harrison Trapnell Clarkson scored on his City debut on 8 August. He also scored the equaliser in the 1–1 draw with Coventry City on 6 February.

FULL ARTICLE AT WIKIPEDIA.ORG
This article is licensed under the GNU Free Documentation License.
It uses material from the Wikipedia article "David Clarkson."
Back to Article
/