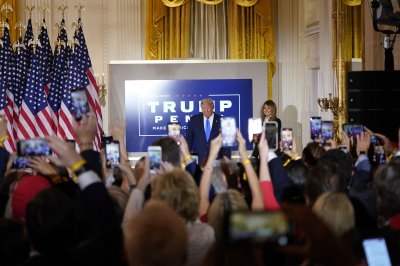 U.S. News // 2 months ago
Corey Lewandowski, 3 others at White House event, have COVID-19
Trump campaign adviser Corey Lewandowski and three other people who attended an election night event at the White House last week have tested positive for COVID-19.

U.S. News // 4 years ago
Trump fires Virginia co-chair for protesting against RNC
Donald Trump said this week he's happy to take on the Republican establishment, but apparently his campaign's co-chair in Virginia isn't permitted to do that.

Every firefighter in the nation personally felt the tragedy on (Sept. 11) and President Bush has stood by first-responders' sides first by fighting for record-level funding and secondly promising to defeat the terrorists responsible

David N. Bossie (b. ) is an American political consultant in the field of opposition research and the president of conservative political action committee Citizens United. In 1992, Bossie worked with founder Floyd Brown in what was essentially a "two-man operation" as director of political affairs of Citizens United.

During the 1992 presidential election, Bossie worked with Floyd Brown on a political action committee, the Presidential Victory Committee. During that time, CBS ran an investigative report "Dirty Tricks," by Eric Engberg on the Dan Rather news hour, alleging that Bossie and a retired policeman named Jim Murphy used what Engberg called "police state" tactics to harass the family of a young woman in Arkansas, Susann Coleman, in their efforts to prove that she had committed suicide because of an affair with Bill Clinton.

During the Bill Clinton presidential term, Bossie was hired as chief investigator for the Whitewater hearings held by U. S. Senator Lauch Faircloth, and was an investigator for Representative Dan Burton (R-IN), the chairman of the House investigation into alleged Clinton campaign finance abuses. Bossie was fired from that position at the behest of Newt Gingrich, who found that Bossie had demanded that certain film be edited so that it portrayed Clinton staffer Webster Hubbell in a negative light. Bossie later defended himself on ABC News:

FULL ARTICLE AT WIKIPEDIA.ORG
This article is licensed under the GNU Free Documentation License.
It uses material from the Wikipedia article "David Bossie."
Back to Article
/