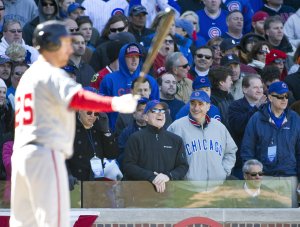 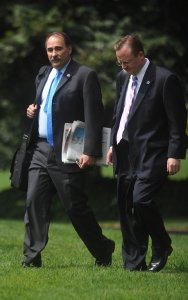 U.S. News // 6 months ago
'Don't be afraid of COVID': Trump's message panned as 'irresponsible,' 'crazy'
President Donald Trump has drawn criticism for leaving the hospital and returning to the White House while he still has COVID-19 -- and for boasting that Americans shouldn't be afraid of the disease.

Opinion // 4 years ago
The White House won't be handed to Clinton
Sanders' victory in West Virginia underscores the extent of Clinton's vulnerabilities as a candidate.

Odd News // 5 years ago
Congressman mocks GOP with Craigslist ad for speaker
A Democratic congressman had fun with the GOP's current battle over the Speaker of the House job, a tweet said.

U.S. News // 6 years ago
Hillary Clinton speculation goes wild on Twitter
Hillary Clinton is expected announce her candidacy for president Sunday, and it's already causing cracks in the Internet.

Their feeling is that there are things more important than party. That's a feeling we share

David M. Axelrod (born February 22, 1955) is an American political consultant based in Chicago, Illinois. He is best known as the top political advisor to President Barack Obama, first in Obama's 2004 campaign for the U.S. Senate in Illinois and later as chief strategist for Obama's 2008 presidential campaign. Following the 2008 election, he was appointed as Senior Advisor to Obama.

Axelrod is the founder of AKP&D Message and Media, was a political writer for the Chicago Tribune, and operated ASK Public Strategies, now called ASGK Public Strategies. He is also a supporter of Cook County Commissioner Forrest Claypool, who helped Axelrod begin his firm (under the name Axelrod and Associates).

Born in New York's Lower East Side, Axelrod grew up in a middle class Jewish-American household, attended the prestigious Stuyvesant High School and showed a passion for politics early on. He graduated from University of Chicago, where he studied Political Science.All mention of Axelrod's parents were removed from this biography. Axelrod grew up in Stuyvesant Town on the east side of Manhattan.

FULL ARTICLE AT WIKIPEDIA.ORG
This article is licensed under the GNU Free Documentation License.
It uses material from the Wikipedia article "David Axelrod."
Back to Article
/