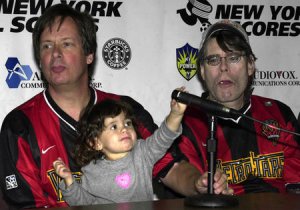 U.S. News // 3 years ago
Former Rep. Steve LaTourette dead at 62 from pancreatic cancer
Former U.S. Rep. Steve LaTourette, R-Ohio, known for his moderate brand of politics, died at the age of 62 of pancreatic cancer.
Music // 7 years ago
Literary figure Kathi Goldmark dead at 63
U.S. author and country-rock singer Kathi Kamen Goldmark died in San Francisco after a long battle with breast cancer, friends and family said. She was 63.
Music // 8 years ago
'Smash' actor to headline 'Starcatcher'
The off-Broadway cast of "Peter and the Starcatcher" is to reunite for the show's Broadway premiere, the play's producers announced.
Entertainment News // 8 years ago
'Peter and the Starcatcher' heads to Broadway
The Peter Pan origin story "Peter and the Starcatcher" is to open on Broadway this March, the producers of the new American play said Thursday.
Entertainment News // 1 decade ago
La Jolla Playhouse planning 'Pan' prequel
California's La Jolla Playhouse has announced it plans to present a new Peter Pan play, "Peter and the Starcatchers," in the winter of 2009.
Odd News // 1 decade ago
International Talk Like a Pirate Day dawns
International Talk Like a Pirate Day dawned Monday, a day when it's deemed alright to affectionately call co-workers scurvied sea-bags.
Entertainment News // 1 decade ago
Disney plans animated 'Peter Pan' prequel
Plans are under way in Hollywood for an animated feature based on the best-selling children's book "Peter and the Starcatchers," Daily Variety said Thursday.
Entertainment News // 1 decade ago
Dave Barry taking a break from column
Popular U.S. syndicated columnist Dave Barry is taking a break from writing his weekly humor column after 30 years of entertaining and enlightening readers.
Top News // 1 decade ago
Book of the week: 'Biology at Work'
Book Review: "Biology at Work: Rethinking Sexual Equality" by Kingsley R. Browne, Rutgers U. Press, 288 pp., $28.00
Odd News // 1 decade ago
Film of the Week: Dave Barry's Big Trouble
Make a list of all the outstanding prose stylists in America - your John Updikes, your Phillip Roths, your Tom Wolfes - and the one superb writer you are almost

And they can actually read the news, which is hilarious. That's all I read. I just read the papers and go, 'Well, that's stupid'. And I write 800 words and when it boils down to it, it's 'Well, that was stupid.' They can do that without me

I want to thank my editor who proposed the idea of me writing a novel ... and I forgive him for the fact that he never told me that I would need to come up with characters and a plot

A lot of us have developed a powerful laundry phobia, and we will continue to suffer from it as long as women roll their eyes and shove us away from the washing machine when we're about to, for example, wash our delicate silks in the same load as our boat cover. This is also true ... of cleaning and cooking and remembering where, exactly, we left the children

David "Dave" Barry (born July 3, 1947) is a Pulitzer Prize-winning American author and columnist, who wrote a nationally syndicated humor column for The Miami Herald from 1983 to 2005. He has also written numerous books of humor and parody, as well as comedic novels.

Barry was born in Armonk, New York, where his father—also named David Barry—was a Presbyterian minister. He was educated at Wampus Elementary School and Harold C. Crittenden Junior High School (both in Armonk), and Pleasantville High School where he was elected "Class Clown" in 1965. He earned a Bachelor of Arts degree in English from Haverford College in 1969. In his book, Dave Barry's Greatest Hits, he stated that during college he was in a band called "The Federal Duck."

As the son of a minister and an alumnus of a Quaker-affiliated college, Barry avoided military service during the Vietnam War by registering as a religious conscientious objector.

FULL ARTICLE AT WIKIPEDIA.ORG
This article is licensed under the GNU Free Documentation License.
It uses material from the Wikipedia article "Dave Barry."
Back to Article
/