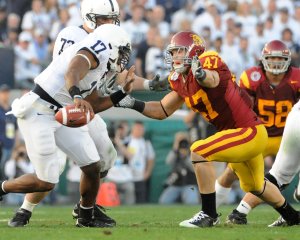 As a redshirt freshman, Clark appeared in five games during the 2006 season for the Penn State Nittany Lions. He completed 14 passes in 27 attempts for 116 yards and ran for 48 yards with 3 touchdowns as a backup to Anthony Morelli. He made his college football debut in a loss to Notre Dame, scoring on a five yard run near the end of the game.

Clark saw more playing time as a sophomore in 2007, again as a back-up to Anthony Morelli. He completed 6 passes out of 9 attempts for 131 yards and ran for 78 yards and two touchdowns. Clark saw significant playing time in the 2007 Alamo Bowl versus the the Texas A&M Aggies. Penn State trailed the Aggies 14-0 in the second quarter when Paterno sent him in the game in place of Morelli to provide an offensive spark. Clark responded by running for 50 yards on six carries and one touchdown. The game marked with debut of Penn State's new spread offense which replaced the traditional pocket passing- and tailback- oriented offense used by Penn State that season.

FULL ARTICLE AT WIKIPEDIA.ORG
This article is licensed under the GNU Free Documentation License.
It uses material from the Wikipedia article "Daryll Clark."
Back to Article
/