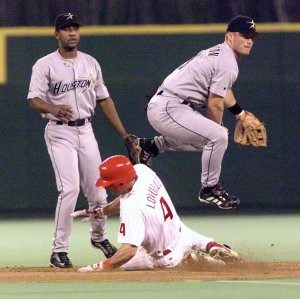 Daryle Lamar Ward (born June 27, 1975 in Lynwood, California) is a Major League Baseball outfielder and first baseman who currently plays for the Charlotte Knights, the AAA affiliate of the Chicago White Sox. He bats and throws left-handed. The 6-foot-2, 240 pound (109 kg) Ward was drafted by the Detroit Tigers in the 1994 amateur draft. He is the son of former major leaguer Gary Ward. As of 2008, he was one of four active major leaguers (along with Moisés Alou, Prince Fielder, and Ken Griffey, Jr.) to hit 20 home runs in a season whose fathers had also hit 20 home runs in an MLB season.

Ward came to the Houston Astros in December 1996 as part of a ten-player trade with Detroit. During the 1999 AAA Home Run Derby in his home stadium of Zephyr Field in New Orleans, he won the Home Run Derby. The next day, he hit a 3 run home run in the All Star Game, leading the PCL to victory after joining the team as a last minute replacement. His home run outshone Russel Branyan's paltry solo home run in the same game. He debuted in 1999, hitting 8 home runs in 150 at bats. In 2000, he hit 20 home runs in just 264 at-bats. In his third season for the Astros, Ward batted .263 with 9 home runs and 39 RBI in 95 games. The next year, 2002, he batted .276 with 12 home runs and 72 RBIs in 136 games. On July 6 of that year, he became the first (and remains, to date, the only) player to hit a home run out of Pittsburgh's PNC Park and into the Allegheny River "on the fly" during a regular-season game; the shot, a grand slam, came off Pittsburgh's Kip Wells. Many Home Runs have made the river on the bounce, and several home runs hit during the 2006 Major League Baseball Home Run Derby made the river on the fly as well, creating speculation of juiced balls.

FULL ARTICLE AT WIKIPEDIA.ORG
This article is licensed under the GNU Free Documentation License.
It uses material from the Wikipedia article "Daryle Ward."
Back to Article
/