NBA // 1 year ago
Mike D'Antoni wants to coach "at least" three more seasons
Houston Rockets head coach Mike D'Antoni hopes he will continue coaching the team even as he enters the final year of his contract.

NBA // 1 year ago
Rockets, minus Anthony, visit Nuggets
It is only fitting that the Houston Rockets are playing the Nuggets in Denver on Tuesday night with the drama of Carmelo Anthony's rumored departure taking place.

NBA // 2 years ago
Houston Rockets pair Chris Paul with James Harden, vying for another All-Star
Point guard Chris Paul unexpectedly opted into his deal with the Los Angeles Clippers, but was traded to the Houston Rockets, according to league sources. 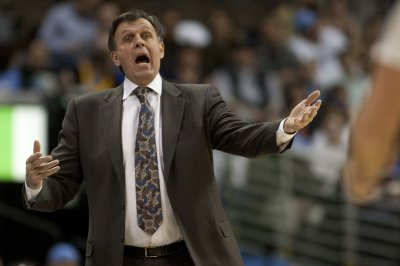 We're excited to have Yao Ming back. He's the centerpiece of the Rockets for many years, the foundation of our franchise

Daryl Morey (born 1972) is an American sports executive. He is the current general manager of the Houston Rockets of the National Basketball Association. He was named Assistant General Manager on April 3, 2006 and succeeded Carroll Dawson as General Manager on May 10, 2007. Morey came to the Rockets after serving three years as Senior Vice President of Operations and Information for the Boston Celtics. While with the Celtics, basketball operations was a key part of his responsibilities, including the development of analytical methods and technology to enhance basketball decisions related to the draft, trades, free agency and advance scouting of opponents for the coaching staff. His hiring follows the recent Moneyball trend of adding more advanced statistical-based analysis to the tradition use of qualitative scouting and basic statistics. Several teams have hired executives with non-traditional basketball backgrounds, but the Rockets are the first NBA team to hire a general manager in this vein. He continues to be the chairperson for the annual MIT Sloan Sports Analytics Conference.

Morey received a bachelor’s degree in computer science with an emphasis on statistics from Northwestern University, as well as an MBA from the MIT Sloan School of Management. Morey also served as the professor for the MIT Sloan class, “Analytical Sports Management.”

FULL ARTICLE AT WIKIPEDIA.ORG
This article is licensed under the GNU Free Documentation License.
It uses material from the Wikipedia article "Daryl Morey."
Back to Article
/