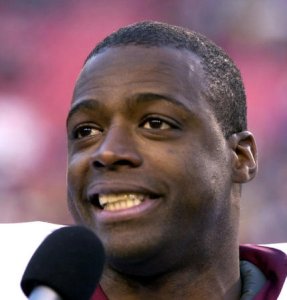 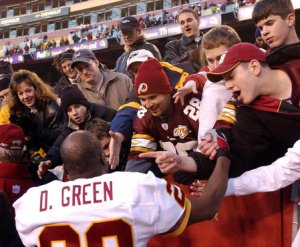 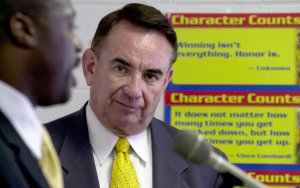 Sports News // 4 years ago
Penn State's Apke nabs MVP in Collegiate Bowl
The National team scored all of its points in the second half and shut out the American team 23-0 on Saturday in the seventh NFL Players Association Collegiate Bowl at the Rose Bowl in Pasadena, Calif.

As I did the victory lap (for the fans), it brings an end to what I was known for as football player, but it also launches my new life

I'll miss the game, and I'll definitely miss the people ... but I mean, I missed elementary school when I went on to junior high

So many kids are fatherless ... there's so much hopelessness. We need to knock those walls down, and provide safe havens for them

Darrell Ray Green (born February 15, 1960 in Houston, Texas) is a former American football cornerback in the National Football League who played for the Washington Redskins from 1983 to 2002. He is widely considered to be one of the greatest cornerbacks to ever play football. Green was inducted into the Pro Football Hall of Fame in 2008.

The self-proclaimed "itty bitty guy," Green was nicknamed the "Ageless Wonder" by his peers and the general media for his remarkable ability to maintain a high level of play well into the twilight of his career. Green was also known for his speed and was one of the fastest players in the history of the NFL.

Green was born in Houston, Texas and attended Jesse H. Jones High School. While there, he was an All-State selection in track and an All-City pick in football, in which he was a walk-on. Green made the junior varsity football team his junior year, and then made the varsity team as a senior.

FULL ARTICLE AT WIKIPEDIA.ORG
This article is licensed under the GNU Free Documentation License.
It uses material from the Wikipedia article "Darrell Green."