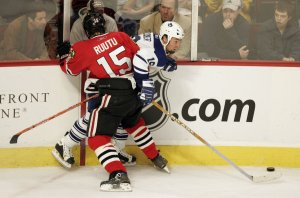 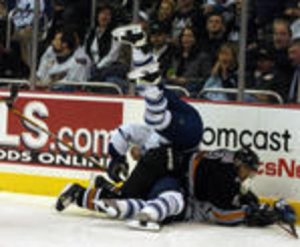 I don't think he intended to hurt me. Not at all

Leafs lose Tucker for balance of playoffs May 11, 2002

Why would I talk to Collie Campbell? He's too smug to talk to anybody

Leafs lose Tucker for balance of playoffs May 11, 2002

Tucker is one of three players, along with Tyson Nash and Ryan Huska, that were a part of all three Kamloops Blazers Memorial Cup wins in 1992, 1994 and 1995. In 1996, while playing for the Fredericton Canadiens, he won the Dudley "Red" Garrett Memorial Award as the top rookie of the American Hockey League (AHL).

Tucker was drafted in the sixth round (151st overall) by the Montreal Canadiens in the 1993 NHL Entry Draft. He was traded to the Tampa Bay Lightning with Stéphane Richer and David Wilkie for Patrick Poulin, Igor Ulanov and Mick Vukota in 1998, where he played for three seasons before being traded to the Maple Leafs in 2000 for Mike Johnson.

FULL ARTICLE AT WIKIPEDIA.ORG
This article is licensed under the GNU Free Documentation License.
It uses material from the Wikipedia article "Darcy Tucker."
Back to Article
/