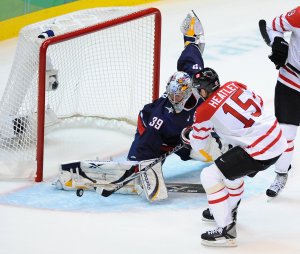 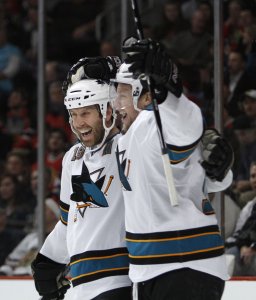 Daniel James Heatley (born January 21, 1981) is a Canadian professional ice hockey winger currently playing for the San Jose Sharks of the National Hockey League (NHL). Originally drafted by the Atlanta Thrashers second overall in the 2000 NHL Entry Draft, he won the Calder Memorial Trophy as the top NHL rookie in 2002. However, after being responsible for a car accident in September 2003 that killed teammate and close friend Dan Snyder, he requested a trade and was subsequently dealt to the Ottawa Senators.

One of the Senators' perennial leading scorers during his tenure with Ottawa, Heatley set franchise records for single-season goals (50), which he achieved in back to back seasons in 2005-2006 and 2006-2007, and points (105), during the 2006-2007 season. He played on the left wing with line mates Jason Spezza and Daniel Alfredsson. The line was consistently among the highest scoring in the NHL after its formation in the 2005-2006 season, with the trio combining for a total of 296 points that season. Heatley is known for his ability to snipe on both the left and right side of the ice, and is often seen scoring goals off the one timer.

FULL ARTICLE AT WIKIPEDIA.ORG
This article is licensed under the GNU Free Documentation License.
It uses material from the Wikipedia article "Dany Heatley."