NBA // 2 years ago
Spurs faces Clippers, aims for fourth straight win
San Antonio has been enigmatic this season but is finally playing consistently and bunching together victories. 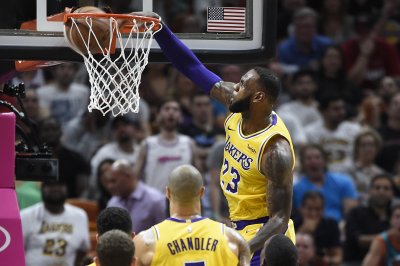 NBA // 2 years ago
Lakers aim to use newfound defensive responsibility against Spurs
After tightening up on the defensive end in recent games, the Los Angeles Lakers will try to clamp down on the visiting San Antonio Spurs on Wednesday night.

NBA // 2 years ago
Heat can wrap up playoff spot by beating Nets
The Miami Heat's schedule, at the moment at least, is as soft as a wet sponge ... or marshmallows ... or Drake's music.

NBA // 2 years ago
LeBron James: Cavaliers star stuffs Nets with slam
LeBron James threw down one of his more ferocious dunks this season Sunday against the Brooklyn Nets.

Dante Cunningham (born April 22, 1987) is an American professional basketball player who plays for the Charlotte Bobcats. Dante was drafted in the second round (33rd overall) of the 2009 NBA Draft by the Portland Trail Blazers of the NBA. Cunningham, a forward, attended Villanova University in Pennsylvania.

Cunningham was born in Clinton, Maryland, to Searcy Blankenship and Ron Cunningham. His older sister Davalyn played in the WNBA.

Cunningham was originally educated at St. John's High School in Washington, D.C. While a junior, he averaged 10 points per game and 7.4 rebounds. One of his teammates, Dwayne Anderson, would later play at Villanova with Cunningham.

FULL ARTICLE AT WIKIPEDIA.ORG
This article is licensed under the GNU Free Documentation License.
It uses material from the Wikipedia article "Dante Cunningham."
Back to Article
/