TV // 9 months ago
Danny McBride thinks TV is better for comedy than movies
Danny McBride is about to launch his third series for HBO -- "The Righteous Gemstones." 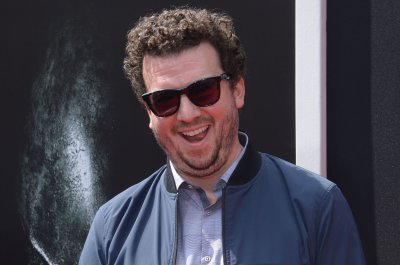 TV // 10 months ago
Danny McBride approached by Kanye West to portray him in a movie
Danny McBride said on "Jimmy Kimmel Live" that he met with Kanye West about portraying the rapper in a film about his life.

McBride was born in Statesboro, Georgia and raised in Fredericksburg, Virginia, where he attended Courtland High School. In 2006, he played one of the lead roles in the low-budget comedy film The Foot Fist Way, which he wrote with friends and frequent collaborators Jody Hill and Ben Best. McBride appeared as a guest on Late Night with Conan O'Brien on February 26, 2008 as the character Fred Simmons of The Foot Fist Way.

McBride has appeared in the comedy films Hot Rod, The Heartbreak Kid, Pineapple Express, Tropic Thunder, Observe and Report, and Your Highness. He wrote and starred in the HBO sitcom Eastbound & Down, about a washed up former major league baseball player with anger management issues, also a collaboration with Hill and Best. The teachers that appear in the series are teachers that McBride actually had in high school. The series is produced by Gary Sanchez Productions and the pilot episode premiered February 15, 2009. It features guest appearances from frequent collaborators Will Ferrell and Craig Robinson. On April 8, 2009, HBO announced it had renewed the series for a second season. In March 2009, McBride was offered a contract to play professional baseball with the Pensacola Pelicans, a minor league team in the American Association of Independent Professional Baseball. He received the offer for his role as Kenny Powers on Eastbound & Down. In addition, in 2010, he signed an endorsement deal with K-Swiss shoes, again performing in character as Powers. On October 27, 2010, it was announced that HBO had renewed Eastbound & Down for a third season.

FULL ARTICLE AT WIKIPEDIA.ORG
This article is licensed under the GNU Free Documentation License.
It uses material from the Wikipedia article "Danny McBride."
Back to Article
/