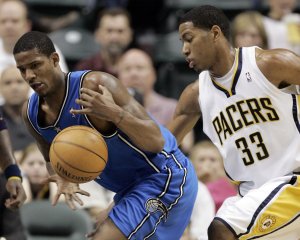 Sports News // 5 years ago
Paul George leads Pacers over Timberwolves
INDIANAPOLIS -- Maybe it's time to stop calling this a hot streak and start expecting these remarkable performances from Paul George.

Sports News // 5 years ago
New-look Miami Heat head to MSG to face New York Knicks
The Miami Heat bolstered their backcourt prior to the NBA trade deadline, but will be without All-Star center Chris Bosh when they visit the New York Knicks Friday at Madison Square Garden.

Danny Granger, Jr. (born April 20, 1983) is an American professional basketball player for the Indiana Pacers of the NBA. He is mainly a small forward, though he does log time at the power forward position. Before his professional career, he went to Grace King High School in Metairie, Louisiana where he was a McDonald's All-American nominee before his senior year. He was an academic student who scored a 30 on the ACT and was offered a scholarship to attend Yale University. He played for Bradley University and then transferred to University of New Mexico before his junior year.

Granger graduated with a degree in civil engineering.

FULL ARTICLE AT WIKIPEDIA.ORG
This article is licensed under the GNU Free Documentation License.
It uses material from the Wikipedia article "Danny Granger."
Back to Article
/