NHL // 2 years ago
Ducks look to halt slide, host Rangers
After earning their first road win nearly a month into the season, the New York Rangers will try to make it two in a row when they face the Anaheim Ducks on Thursday night at Honda Center. 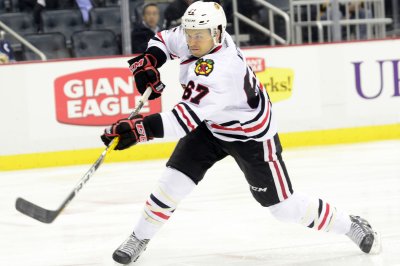 NHL // 4 years ago
Phoenix Coyotes halt Washington Capitals' six-game win streak
GLENDALE, Ariz. -- Washington Capitals coach Barry Trotz wanted at least a three-point lead over the Columbus Blue Jackets heading into Sunday's Metropolitan Division showdown with the Blue Jackets in Columbus. He'll have it, but not the way he would have scripted it.

NHL // 4 years ago
NHL roundup: recap, scores, notes for every game played on March 25
MONTREAL -- Andrei Markov scored two goals to lift the Montreal Canadiens to a 3-1 victory over the Ottawa Senators on Saturday night at the Bell Centre.

After two seasons in the Ontario Provincial Junior A Hockey League (OPJHL) with the Wexford Raiders, Winnik joined the college hockey ranks with the University of New Hampshire of Hockey East. Following his freshman year, Winnik was drafted 265th overall in the 2004 NHL Entry Draft by the Phoenix Coyotes. He found his scoring touch with the Wildcats in his sophomore year scoring 18 goals for 40 points and was one of UNH's best in being named in the NCAA Northeast Regional All-Tournament team. In his junior year Daniel consolidated his break out year by leading the Wildcats with 26 assists and finishing 5th in the Hockey East in scoring with 41 points. He was named as Hockey East player of the month for November and was selected to the Hockey East Second All-Star Team. After completing a three year career with New Hampshire he signed a three-year entry level contract with the Coyotes on March 31, 2006. He immediately made his professional debut with AHL affiliate, the San Antonio Rampage, to finish the 2005–06 season.

In his first full professional year in 2006–07, Winnik played in a checking role with the Rampage scoring 21 points in 66 games while also spending a stint in the ECHL with secondary affiliate, the Phoenix RoadRunners. In 2007–08, Winnik made the Coyotes lineup out of training camp and scored his first NHL goal in his debut on October 4, 2007 in a 3–2 win against the St. Louis Blues. At the end of his first NHL year Winnik had established himself as a regular in the Coyotes team and was looked upon, by coach Wayne Gretzky, as the team's top penalty killer.

FULL ARTICLE AT WIKIPEDIA.ORG
This article is licensed under the GNU Free Documentation License.
It uses material from the Wikipedia article "Daniel Winnik."
Back to Article
/