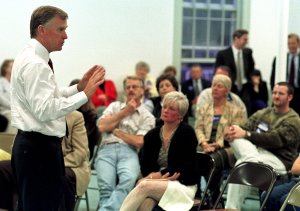 U.S. News // 1 month ago
'Nasty woman': A look at memorable presidential debate moments
President Donald Trump and Democratic presidential nominee Joe Biden are set to meet for their first debate Tuesday, picking up a tradition that has produced a number of memorable moments over the last 60 years.

Top News // 3 months ago
The Almanac
On Aug. 19, 1991, a coup orchestrated by hard-line Communists removed Mikhail Gorbachev as president of the Soviet Union.

Top News // 1 year ago
On This Day: Gorbachev removed in coup
On Aug. 19, 1991, a coup orchestrated by hard-line Communists removed Mikhail Gorbachev as president of the Soviet Union.

U.S. News // 1 year ago
Donald Trump to attend George H.W. Bush's funeral; body to lie in state
President Donald Trump will attend the funeral of late President George H.W. Bush and has designated Wednesday as a national day of mourning for the former commander-in-chief. 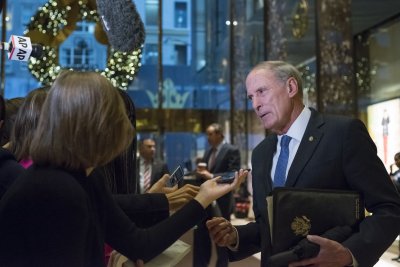 U.S. News // 3 years ago
Reports: Former Indiana senator Coats Trump's pick for intelligence chief
As the top U.S. intelligence official testified at a Senate hearing, the man who will take over the post for President-elect Donald Trump was named.

Top News // 4 years ago
The Almanac
On Aug. 19, 1991, a coup orchestrated by hard-line Communists removed Mikhail Gorbachev as president of the Soviet Union. The coup would lead to the dissolution of the Soviet Union on December 26, 1991.

Commentary: Arnaud de Borchgrave // 5 years ago
Running mates: Bush 41 and 43's biggest mistakes?
Speculation over the consequences of a Powell vice presidency under either Bush 41 or 43 is intriguing. Would the disasters following September 11th been averted or minimized? The latest book by 43 suggests the answer would have been yes.
U.S. News // 5 years ago
Corinne Quayle, mother of former VP, dies
Corinne Quayle, mother of former Vice President Dan Quayle, died last week at the age of 92.

He knows less about national security than I do about spelling

According to recent polling, a similar scenario could unfold this year

James Danforth "Dan" Quayle (pronounced /ˈkweɪl/; born February 4, 1947) served as the 44th Vice President of the United States, serving with President George H. W. Bush (1989–1993). He served as a U.S. Representative and U.S. Senator from the state of Indiana.

Quayle was born in Indianapolis but spent most of his childhood living in Arizona. He obtained his J.D. from Indiana University School of Law – Indianapolis in 1974 and married Marilyn Tucker in 1972. He practiced law in Huntington, Indiana with his wife before being elected to the United States Congress in 1976, aged 29. In 1980, Quayle entered the Senate.

In 1988, incumbent U.S. Vice-President and Republican presidential candidate George H. W. Bush called upon Quayle to be his running mate in the forthcoming election. Although this choice was met with some dismay, the Bush/Quayle ticket won the 1988 Election over Democrat Michael Dukakis. Making official visits to 47 countries and being appointed chairman of the National Space Council, Quayle's vice-presidency was considered to be very eventful. He secured re-nomination for vice-president in 1992 but the Bush/Quayle ticket was defeated by Democrat Bill Clinton and his vice-presidential nominee, Al Gore.

FULL ARTICLE AT WIKIPEDIA.ORG
This article is licensed under the GNU Free Documentation License.
It uses material from the Wikipedia article "Dan Quayle."
Back to Article
/