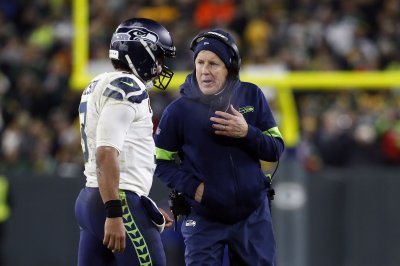 U.S. News // 2 months ago
CEO of Texas power grid operator terminated in aftermath of storm
The board overseeing the Electric Reliability Council of Texas, the independent nonprofit entity that operates and manages the electricity grid that covers much of Texas, fired ERCOT CEO Bill Magness.

U.S. News // 2 months ago
Texas power shortage leads to rolling blackouts in winter storm
Officials from the Electric Reliability Council of Texas said the state's energy supply fell short by about 45,000 megawatts leading to rolling blackouts that have left more than 3 million people without power.

Top News // 11 months ago
The Almanac
On May 15, 1972, Alabama Gov. George Wallace and three others were injured by a gunman at a presidential campaign rally in Laurel, Md. Wallace was partially paralyzed.

To sit here and suggest this (bill) creates an unsafe environment is wrong. As an employer... I think that argument is really weak

I thought this was important enough to do that... Bill Maher said things that were offensive and I wanted him off the air

Dan uses biblical principles whenever possible to draw attention to the meaning of a news event or to put a news event in perspective. For the last decade, Dan has stated on his bio that his main goal in life is to expand God's Kingdom on earth

Is there support? Can I raise the money? If so, I'll make the decision

Daniel Patrick Pugh (born May 15, 1956), professionally known as Dan Patrick, is an American sportscaster, radio personality, and actor from Mason, Ohio. He currently hosts The Dan Patrick Show which is broadcast on radio on Premiere Radio Networks, and on television on The 101 Network, co-hosts NBC's Football Night in America, and serves as a senior writer for Sports Illustrated. He previously worked (and is perhaps best known) for ESPN for 17 years, where he often anchored the weeknight and Sunday 11 PM edition of SportsCenter. He attended the University of Dayton in Dayton, Ohio. His brother, Bill Pugh, is a longtime sports radio executive, and is currently the head of programming at Clear Channel San Diego.

Patrick was a basketball player in high school at William Mason High School, becoming an Ohio all-state selection his senior year. He attended Eastern Kentucky University on a basketball scholarship for two years before transferring to the University of Dayton, where he majored in broadcast journalism.

Before working with ESPN, Patrick was known by his real name, Dan Pugh, as an on-air personality with the album rock-formatted WTUE in Dayton, Ohio (1979–1983). Patrick was then a sports reporter for CNN (1983–89), where his assignments included the World Series, NBA Finals and Winter Olympics. From 1989–1995 Patrick did a daily sports segment for Bob and Brian, a syndicated Wisconsin-area morning show, and in the early 90s he did sports updates for the Columbus, Ohio, Rock Station WLVQ and appeared on the morning show "Wags and Elliot."

FULL ARTICLE AT WIKIPEDIA.ORG
This article is licensed under the GNU Free Documentation License.
It uses material from the Wikipedia article "Dan Patrick."
Back to Article
/