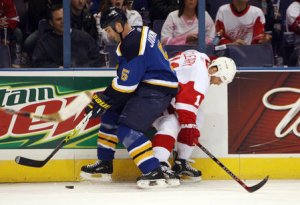 Daniel Cleary (born December 18, 1978) is a professional ice hockey winger playing for the Detroit Red Wings of the National Hockey League. On June 4, 2008, Cleary became the first player from Newfoundland and Labrador to get his name on the Stanley Cup when the Red Wings won hockey's top prize. He was selected in the first round of the 1997 NHL Entry Draft, 13th overall, by the Chicago Blackhawks. A common mistake made by announcers during NHL games is saying Cleary is from Carbonear, Newfoundland. Cleary was born in Carbonear, as this was/is the location of the area's only hospital, but he was raised in a nearby town called Harbour Grace, in a section of the town called Riverhead.

After playing minor hockey in his home area of Harbour Grace, Cleary left home at age 15 to play for the Kingston (ON) Voyageurs of the Metro Junior Hockey League (OHA). He scored 46 points in 41 games with the V's that season and subsequently was selected 11th overall in the 1994 OHL Priority Selection by the Belleville Bulls.

Cleary had a phenomenal junior career with the Belleville Bulls of the OHL which begun by scoring a hat trick in his very first game as an underage 16 year old. Ironically, Cleary scored that hattrick against the Guelph Storm and current Red Wings teammate, Todd Bertuzzi in September of 1994.

FULL ARTICLE AT WIKIPEDIA.ORG
This article is licensed under the GNU Free Documentation License.
It uses material from the Wikipedia article "Dan Cleary."
Back to Article
/