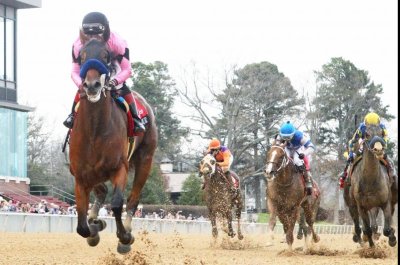 Top News // 4 years ago
The Almanac
On Oct. 4, 1927, artist Gutzon Borglum begins sculpting Mount Rushmore. It would take 14 years to complete, with work on the monument finishing in 1941.
Sports News // 7 years ago
A look at weekend Thoroughbred racing
Fans of Kentucky Derby preps have another treat in store this weekend with four on tap, all conveniently a day before the Super Bowl.

He was best known for his short stories celebrating the world of Broadway in New York City that grew out of the Prohibition era. To New Yorkers of his generation, a "Damon Runyon character" evoked a distinctive social type from the Brooklyn or Midtown demi-monde. The adjective "Runyonesque" refers to this type of character as well as to the type of situations and dialog that Runyon depicted. He spun humorous tales of gamblers, hustlers, actors, and gangsters, few of whom go by "square" names, preferring instead colorful monikers such as "Nathan Detroit," "Benny Southstreet," "Big Jule," "Harry the Horse," "Good Time Charley," "Dave the Dude," or "The Seldom Seen Kid." Runyon wrote these stories in a distinctive vernacular style: a mixture of formal speech and colorful slang, almost always in present tense, and always devoid of contractions. A passage from "Tobias the Terrible", collected in More than Somewhat (1937) illustrates Runyon's memorable prose:

If I have all the tears that are shed on Broadway by guys in love, I will have enough salt water to start an opposition ocean to the Atlantic and Pacific, with enough left over to run the Great Salt Lake out of business. But I wish to say I never shed any of these tears personally, because I am never in love, and furthermore, barring a bad break, I never expect to be in love, for the way I look at it love is strictly the old phedinkus, and I tell the little guy as much.

FULL ARTICLE AT WIKIPEDIA.ORG
This article is licensed under the GNU Free Documentation License.
It uses material from the Wikipedia article "Damon Runyon."
Back to Article
/