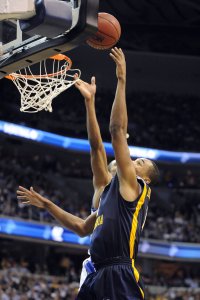 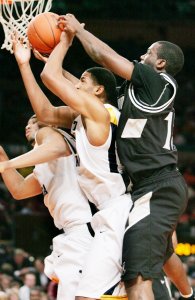 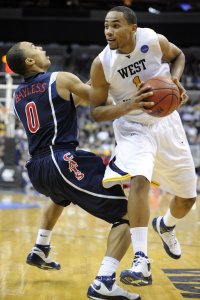 Da'Sean Butler (born January 25, 1987 in Newark, New Jersey) is a forward for the West Virginia Mountaineers. He has made the Big East weekly honor multiple times and has been instrumental in many of the Mountaineers' wins. Butler is considered an extremely versatile player and is considered a late first-round NBA draft prospect.

Da'Sean Butler played basketball in high school at Bloomfield Tech High School. As a junior, Butler averaged 15.7 points per game. As a senior, Butler earned all-state honors while averaging 15.1 points per game and 11 rebounds per game. He scored 1,044 career points and led his school to 97 wins. He played in the Jordan All-American Classic regional game at the end of his high school career.

FULL ARTICLE AT WIKIPEDIA.ORG
This article is licensed under the GNU Free Documentation License.
It uses material from the Wikipedia article "Da'Sean Butler."
Back to Article
/